When is it Too Late to Send Out Holiday Cards?

Catching up with my life 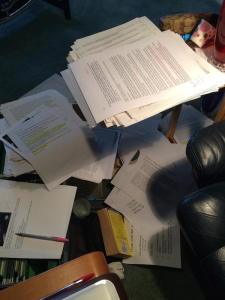 At what point do I put away the stack of Christmas, Hanukah, and New Years cards that have been sitting on my desk since last Halloween?

My intentions to send them out in a timely manner, along with much of the rest of my life, were waylaid by my near-despearate commitment to finish a book that was taking far more time than I ever imagined.

More than any project I’ve undertaken in the last fifteen years, I got drawn into the labyrinth of research for a book on perfectionism. This whole thing started with an invitation in March of 2013 to work on a third edition of a book on this topic for gifted teens. A reasonable place to start, but the more I drilled down, discovering the ways perfectionism can be expressed and the number (and range) of people it can affect, it became clear that I was on a very different path than the one on which I originally embarked.

The short version of this story is that by the end of 2013, it was clear that the original plan simply was not meant to be. The project seemed to be dead in the water, but before the year was out, I got a call from an editor I’d worked with on previous projects who was now back with Health Communications, Inc., the publisher I’d wanted to work with from Day 1. A rather convoluted path, but in April 2014, I signed a contract with them and a year later, I sent in my manuscript. It was just after midnight on my 64th birthday.

During the past year, much of my life looked like the photo above, and it was rare that I wasn’t traveling with or surrounded by mountains of paper. Notes from interviews, copies of emails and responses to questions on social media, excerpts from a couple hundred articles and books, and clippings from newspapers and magazines people had sent. Identifying the issues I felt this book needed to address and pulling a coherent thread from this mass of information occupied close to eight months of my life.

To make things more interesting, I was often writing in between severe gall bladder attacks or speaking engagements. The work with teachers and parents was fun; the intense pain, not so much. I schedule surgery for the week after I turned in the manuscript, and took some time off to heal and catch my breath.

Other areas of my life started to require attention, things I had neglected during “writing season” that I could no longer ignore. That would include this site and a newsletter I’ve been paying for for the past 8 months but haven’t sent out since November. (I’m debating whether or not to keep the newsletter going, but do plan on announcing this book in the next week and again in August, so we’ll see.)

When I first started my site (in 1997), I would regularly post what I called blogs about “What Jane’s been up to.” I have copied a few years’ worth onto this new site—I still have about 300 pages from the old site to copy over to this one—but I’ve had a hard time keeping up this part of my life. (That said, I started a blog specifically about “Writing about Perfectionism” at the beginning of my 2-year journey through its current pre-release status.) I suspect that Facebook has pretty much taken over the role these pages played, but not everyone who followed them is on FB and my posts there are limited in terms of what’s going on in my life, and my head.

Beyond finishing this book, my other “accomplishments” are fairly pathetic: boxing up all of the papers and re-doing our silverware drawer. I have started going back to the gym when I’m in town, and if not as regular as I’d like, have been pretty good about resuming my post-surgery Zumba, yoga, weights, and pool activities. I’ve started knitting again and am nearly finished with a Faroe-island-type shawl and what may be the most complex and frustrating project I’ve done in decades. Nonetheless, I’m currently about three rows from the end and have loved the feel of the hand-spun wool I bought in a little shop on Isle of Skye in northern Scotland years ago.

I’m leaving on a for-real vacation that will include 3 days in London and a 2-week cruise to the Shetland Islands, Faroe Islands (hence the shawl), Iceland, and Norway. I’m going with the same friend with whom I travelled to Havana last year. As usual, I have a million things to do before I go, however I’ve gotten very good at letting them all go once I get on the plane and slip (very quickly) into Vacation Mode.

In the meantime, The Perfection Deception, a wonderful title and cover for which I can claim no credit, is in production. (The people at HCI came up with both back in January when I was holed up in a little cabin in southern California, working on chapter 8-11.) The book is scheduled for an August release, although I’m hoping to see a copy before I leave at the end of this month.

I am feeling an intense need to de-clutter my house and office. It’s amazing what can pile up when I’m working on other stuff or out of town. Proud as I am of my silverware drawer, I’m afraid that teensy bit of progress is lost among the closets, shelves, drawers, and other flat surfaces that still need to be cleared off or out. So I am struck with the imperative of (finally) following my own advice to take a minute to sit back and appreciate what I’ve actually managed to pull off here before jumping into my next big project. Because, frankly, I’m not gonna get much done in the two weeks before I leave beyond the more pressing demands of a couple upcoming jobs and packing for whatever a trip so close to the Arctic Circle might require.

Among the tasks I will likely cross off my July list, I don’t imagine that last December’s holiday cards will among them. So please accept this post as my most sincere best wishes for a happy winter holiday, new year, and the rest of 2015.

For more information, see Writing about Perfectionism: An interesting journey (2013-2015)

Sale books: Click here for links to new and used books on a variety of topics at discounted prices.

Hire Jane: Click here for everything you need for your next conference or professional development event.