Time to Agree about Time 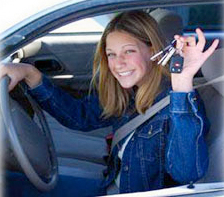 Do you get pushback from your kids when you try to enforce a curfew time? If so, you’re in good company.

This is an area of conflict for many families and very often, the automatic response to a child’s negative response—whether sulking, arguing, complaining, or flat-out defiance—tends to result in more rules, more restrictions, and harsher punishments. It’s easy to see how conflicts like these can escalate or worse, inspire parents to just throw up their hands in exasperation and simply give up. The good news is that in between these win-lose reactions, there is a win-win option that can come much closer to satisfying the needs of everyone concerned.

Several years ago, I was interviewing a single mom for a book on setting boundaries with teenagers. Her 16-year-old son had just passed his driver’s test and Mom was working out how they might share her car so that he could not only help out with errands, but also get the practice he needed to build his driving skills. As far as her son was concerned, errands were fine, as was any chance to use the car, but at the moment, he was far more interested in an upcoming party at a friend’s house that weekend.

No problem, thought the mom. She knew the family well, knew that the parents would be in town, and knew that her son could handle the commute. Nonetheless, she also knew that she needed to set some limits and needed to be assured of his willingness to cooperate before she would hand over the keys. So when he asked if he could have the car for this event, she answered, “Sure. What time do you plan to get home?”

A little note here: When I tell this story in my workshops and seminars, I ask how many adults in the room would be satisfied with this answer. I can tell you that very, very few of the hundreds of thousands of participants who have heard this story would even consider this option. Unfortunately, this is often where the process breaks down, because many parents take great offense at not receiving an immediate, respectful, considerate, and early agreement in exchange for their generosity.

Now an angry, reactive response may be completely understandable, but this mom had a much better idea. She simply said what has become one of my all-time favorite magic sentences: “That won’t work for me.”

Notice that she is asserting her authority and withholding the privilege (for now) without attacking, criticizing, or shaming her son—or even making him wrong. This is not a common practice in our culture and it is the source of much of the conflict we experience in all of our relationships. “I need to know that you are bringing the car in at a specific time before I give you the keys,” she continued.

Her son said, “Fine. I’ll be back at four in the morning.”

Staying remarkably calm, the mom repeated her earlier reply: “That won’t work for me,” she said, adding, “I was thinking more like 8:00.” (It’s always a good idea in negotiating agreements to start a little low. And yes, this is a very appropriate, respectful, and very assertive way to encourage cooperative responses from anyone in your life.)

Her son was not happy. “The party doesn’t even start until 7,” he asserted.

“I see,” said Mom. “Then why don’t you come up with a time we can both live with?” she asked, putting the responsibility for finding a win-win solution—getting what he wants with respect to what she wants—squarely on his shoulders.

Her son thought about it for a minute, offering, “How about midnight?”

Mom considered, secretly wishing for an earlier suggestion but willing, under the circumstances, to see where this would go. “Hmm…,” she said. “That’s a good bit later than I’d like, but I’m willing to trust you can make this work. Now I want you to understand that I’m talking about bringing the car before midnight on my watch (or phone, for example). And because I will need the car the next day, I’ll need you to bring it back with at least half a tank of gas.”

Then she added another important question to confirm his acceptance of the terms of their agreement: “Can you live with that?”

Her son rolled his eyes and said, “Yeah.”

Another note: It’s probably best to not be particularly impressed by the attitude or tone. Kids do what works and in a win-win household, when they see you trying to meet their needs within limits that work for you, this whole attitude thing becomes pretty silly.

Mom followed up with another essential piece of the process, confirming his understanding of the terms: “Tell me what you just agreed to.”

“I’ll bring the car in by midnight by your watch,” he said impatiently. “And I’ll be sure there’s at least half a tank of gas in it.”

Satisfied, Mom continued. “Great,” she said. “And if you get the car in on time with the tank half full, it shows me that you can handle the privilege and can have the car again next weekend if you’d like.” In other words, the positive consequence of his cooperation was the promise of future access to her car.

She also made it clear that this offer was only available if he kept up his end of the bargain, and notice that she did so in a very positive, non-angry, and non-threatening way: “If you don’t get in on time, or don’t get around to refilling the tank if you need to, I’m not going to punish you. I’ll just take it as a signal that you’re not quite ready to borrow my car. We can try again in four weeks when you’re a little more mature.”

And because her son was a normal 16-year-old who liked to test the limits, he asked, “Well, what if I get a flat?”

“Oh, I’m so glad you asked,” mom answered. “I sure hope you get it fixed in time to be home before midnight by my watch.”

Now I know that many parents see anything less that a do-it-or-else approach to parenting as permissive, but trust me, this authoritative, respectful, and calm strategy worked brilliantly. And it worked without the usual conflict and drama that often encumber more dictatorial attempts to secure our kids’ cooperation.

The young man really wanted to keep this privilege and went out of his way to respect his mother’s requests, even leaving early or calling ahead if he anticipated any problems getting home. Nonetheless, I see the real value in this exchange going far beyond just getting the boy—and the car—home on time.

In the process of negotiating his agreement, the mother demonstrated a respect for his need for freedom and autonomy without sacrificing her own need for structure, commitment, and peace of mind. Because responsible parenting does not include turning kids loose on the world with no requirement of a commitment to get home at a specific time. (Although this example focuses on an interaction with a teenager, I have heard examples of successfully using similar language and processes with younger children and with other adults.)

Curfews are important, and they work better as agreements than as commands, orders, or threats. Sure, kids need some freedom, but they also need some structure and limits in their lives.

By the same token, most parents want the reassurance that their kids will make and keep commitments, and prefer to avoid the stress and worry—often compounded by anger and a desire for revenge—that is triggered when a curfew is violated or simply forgotten. It’s up to us to find a win-win answer to the question of “how can we both (or all) get what we want?”

So yes, you’re still in charge, but rather than using your authority to disempower, control, or hurt in some way, you focus it instead on using it to secure agreement in a household in which everyone matters and everyone’s needs are considered.

Note: I wrote this post for Yafa Luria (Margit Crane), dear friend and long-time colleague, as a guest blogger on her former website, Good-Enough Parenting (now Blocked to Brilliant). I have been telling this story to hundreds of audiences since I first met this mom back in the early 90s as it has not only been the source of an incredibly effective and mutually respectful process of communicating and asserting parental authority, but has also given me the specific language I needed to model how this process worked.

Looking for a source for this photo. Thank you.

Please support this site: This website is an ongoing labor of love, with a fair number of expenses involved. Your support will help offset the cost of continual training, technical assistance, and translators, allowing me to continue to maintain the site, add helpful and inspiring new content and links, and keep the site ad-free. Donate here…