Meetings, meetings, and a shot in the arm

Well this was just wonderful! I had an opportunity to work with the Kent School District outside of Seattle. I did two presentations on The Win-Win Classroom: Strategies for Building Responsibility, Cooperation, and Self-Management in a Compassionate School Environment. The district had been working with a grant for Compassionate Schools so it felt like a lot of the groundwork was done— made my job a lot easier.

This engagement had significance on several levels. For one thing, I’ve been on what I’ve taken to calling a sabbatical for most of this past year. In its traditional context, sabbaticals represent “a rest from work, or a hiatus, often lasting from two months to a year.”

So while I wouldn’t exactly call 12- to 14-hour days devoted to the podcasts, newsletters, or Web site development a “rest from work,” my absence from the speaking circuit for the previous 7 months has certainly been a change in the rhythm of my work life, and a very good and very necessary chance to recharge.

My online dictionary also includes a Biblical reference to a commandment to “desist from working in the fields in the seventh year.” As I was recreating some of my old blogs, I remembered years where I was on the road more than I was home, and I also remembered how exhausting and disorienting that pace could get. So after years very intense years of work-related travel, this break has not been entirely inappropriate. Still… By the end of October, I was feeling a little antsy, a little bored, and more than a little tired of being glued to my laptop for weeks at a time.

An odd concern as I was readying for the trip. I have often said that I could talk about these topics in my sleep, and anyone who’s ever gotten me started talking about education or adult-child relationships knows that’s probably true. Nonetheless, seven months was an unusually long stretch for me to be out of “the field,” and despite the blogs and podcast conversations to keep me engaged with my profession, I was feeling a little rusty about getting back up on the stage. Not nervous. (I almost never get nervous about speaking in front of a group.) Just a little disconnected from the content, the stories, the pacing, and the flow.

That said, the second I clipped the mic on, something snapped, an energy burst, if you will. At the risk of slipping into some serious hyperbole, it really felt like an almost spiritual connection to whatever message I was there to deliver. Perhaps this kind of thing happens to remind me of the degree to which this work is so much a part of who I am, and how important it is for me to create opportunities to allow this experience to continue, at least for now. (This often happens during times when I’m feeling most disheartened, discouraged, and… done.)

Professional speaking has never been “just a job” for me, and I always said that the day I lose the passion is the day I hang up my Speaker hat for good. Yet these recent changes (in the economy, in my schedule, even in the course of passing my 60th birthday a year and a half ago) had me seriously considering that maybe I was done, and although I will continue to offer my services to the Universe for as long as I am physically and mentally able— and in whatever forms it will have me serve—the truth is, this is the kind of work that resonates most deeply in my heart and soul.

I have no interest in resuming the pace of much of the past 20 years, and don’t miss waking up in a hotel room trying to remember which city I was in that day. Not a bit. (Besides, 61 isn’t 40, or even 50, and the demands of the past few years were starting to seriously impact my health, and not in a good way.) But I may always yearn for a balance between the work I do in relative isolation and the work that allows for interaction with an audience. A job like this one was just what I need to keep me going, and I’m thankful to the people at Kent who made this one possible—not just for the joy of the work, the travel, and meeting new people, but also for the new questions I have to think and learn about, and the new stories and material I always pick up when I’m connecting face-to-face with educators, counselors, parents, and other people who live and work with kids. A shot in the arm, for sure. 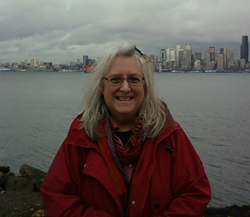 Although I stopped doing this a while ago, I decided to extend my visit to meet up with some of the people I know in the area. (I’d forgotten how many people I knew up there. Even an extra two days didn’t cut it!) After weeks of connecting online and on the phone, I got to meet my Word Press developer, Tom Todd, in person. I was able to stop by the office at the Bureau of Education and Research and visit with Mark Ita, my former program developer, as well as some of the wonderful people who were very much a part of my on-the-road life for about ten years.

I had breakfast with friends Margit Crane (podcast guest) and Deborah Drake (editor of Jeff Wolfsberg’s book, for which I wrote the Foreword last summer), and dinner with my old buddy, Bob Reasoner, who managed to engage me in a most stimulating discussion about the state of education when I would otherwise have just collapsed in my hotel room after a day of presenting. And if this weren’t enough, I got to spend many hours sightseeing and hanging out with Lisa Cramer, who is as much a life-long friend as a cousin. She took me to see the UW campus (Wow!) and the Glass Museum in Tacoma (beyond fantastic— I love glass!) and just introduced me to a part of the world I’ve visited several times, but don’t really know as well as I’d like.

So all in all, a wonderful trip. I could definitely feel the effects of not seeing the sun for four days on my brain chemistry, but I’ve always been sensitive to light (a big part of the reason we left Pittsburgh for New Mexico in 1980) so that was no surprise. I love the Pacific Northwest and was happy to get a chance to spend some time there. And for the folks from Portland to Bellingham who tried to connect, let’s shoot for next time.