Effectively creating structure in your classroom

When I started teaching, I had some reservations about being completely in charge and responsible for the rules, so I tried involving the students in this task. Part of my intention was an honest stab at building a positive, win-win classroom environment, wanting to acknowledge the students’ needs for input and control. I also believed, or at least hoped, that their input would magically inspire self-management. 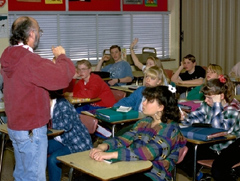 I was wrong. This exercise killed the entire morning and produced about 478 “don’ts,” nearly a quarter of which had to do with a range of objects the students felt they should not throw in the classroom. I quickly realized that the brunt of enforcement would ultimately rest on my shoulders, and with nearly 500 rules, their list would have certainly kept me hopping, putting me more in the role of policing these children than teaching them.

This was my first inkling that there were some serious problems with rules, at least as we know them best. I found this revelation extremely disconcerting: It was obvious that no class could succeed without some kind of structure and authority, but were rules the best tool for establishing them?

Rules certainly were familiar! But there were simply too many places where the methods and dynamics of rule-making and enforcing just didn’t fit in with my idea of win-win. What else was there? Was there a way for teachers to truly get what they wanted from their students without creating additional conflicts, resorting to traditional authoritarian power dynamics, or somehow compromising the emotional climate of the classroom?

I started looking for techniques that worked, strategies that were not only effective in classroom and behavior management, but also in creating the kind of climate that would support the goals and values of a win-win classroom. I had noticed that certain “if . . . then” statements were more positive, more effective and less power-oriented than rules. I discovered that the promise of positive outcomes was less destructive than the threat of negative consequences. And I found that the most successful teachers were those able to ask for what they wanted with clarity, assertiveness, and great respect for the needs, preferences, and dignity of their students. Additionally, research and experience in fields that included business management, child development, counseling, and addiction (family systems as well as chemical dependency) gave me a few more critical ingredients to throw in this stew. The result involved reframing rules as boundaries and suddenly the whole process fell into place.

Now I’m hardly the first person to write about boundary setting (although not all definitions include the characteristics I believe to be essential) and quite frankly, the idea is, in many ways, not all that different from more common terms like limits, contingencies or, in some ways, rules. But the interaction patterns involved in this technique are quite different from those used with rules, and they’re still pretty uncommon in most educational settings.

During the past four decades, I’ve had the good fortune of visiting hundreds of educational institutions throughout the world. Among the features common to most of these vastly different environments were the inevitable lists of “Class Rules” (or, sometimes “School Rules”). In some settings the Rules were displayed in every classroom, in others, in just a handful. Some schools had imposing signs to greet students, staff, and visitors as they entered the building; others had more covert documents with formidable titles like “School Discipline Code.” 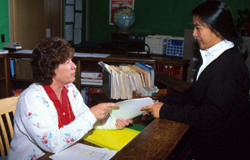 Regardless of format or conveyance, these lists were invariably negative. Often the rule itself was stated negatively: “No hitting,” “Don’t call out,” “Eating in class is prohibited.” However, even when the rule was stated positively (“Turn in work on time,” “Speak respectfully,” “Raise your hand to speak”), the result of an infraction was always negative. In some instances, the punishments— often called “consequences”—were listed right along with the rules. Frequently, to my amusement, the list included consequences for the first infraction, the fifth infraction, the thirtieth infraction . . .

OK, so maybe they didn’t go up quite that high, but think about it: If you’ve got plans (and expectations) for second, third, fourth, or whatever occasions to catch kids doing something wrong, clearly something is not working. In many cases the consequences of the first several transgressions were so inconsequential that the message to the students was clear: “You can break this rule so-many times before anything serious happens to you. You don’t need to change your behavior until right before you really get in trouble!”

There are subtle differences, in process and focus, between encouraging cooperative behavior and discouraging uncooperative behavior. Rules and penalties depend on the students’ fear of the negative consequences. If the child is afraid of a bad grade, missing recess, or having her name written on the board (which, incidentally, simply reinforces attention-getting behavior for most kids) then she may do what you want, often at a cost to her emotional safety and to the general stress level in the class. But how many kids aren’t fazed by even the most severe negative consequences? (Indifference is a great tool for creating safety in an otherwise unsafe environment.) Either way, if you’re committed to win-win priorities, when you rely on rules and punishments, you negatively impact the climate of the classroom, and you very often lose.

Boundaries do not depend on fear or power, other than the teacher’s power to allow a positive consequence to occur when the students have done their part. This positivity represents an important characteristic of a boundary, as well as a significant difference between boundaries and rules. As a management tool in a win-win setting, boundaries are always stated positively, as promises rather than threats. Likewise, boundaries offer a refreshing change from punishment-oriented strategies to a reward-oriented approach to behavior management. Boundaries allow us to think of consequences as the good things students get (or get to do) as a result of their cooperation, changing the prevailing connotation of the word “consequence” from negative to positive. (See Positive Consequences for details.)

In addition to being positive, boundaries support win-win power dynamics because they are themselves win-win. Even the most reasonable rules are oriented to the power needs of the adult, providing information for the students how not to “lose.” Rarely do rules communicate how students can “win” in any other, more positive way. Boundaries, on the other hand, take into consideration to the desires and needs of the students they attempt to motivate.

Additionally, boundaries are proactive, attempting to prevent problems in positive ways. Rules typically focus on the negative or punitive reaction of the teacher (or the system) when a student gets caught. Both rules and boundaries can prevent misbehavior, but because with rules the payoff to students for compliance is simply avoiding a negative consequence, the process of enforcement becomes unavoidably reactive. (This is why simply posting a bunch of rules, penalties, or punishments before kids misbehave is proactive only in forewarning of impending reactivity!) With a boundary, a positive outcome simply does not happen unless the desired behavior occurs. The absence of the positive outcome— pending the student’s cooperation— is, in most cases, the only “teacher reaction” necessary. (Other characteristics of boundaries, such as clarity and follow-through, as well as implementation details, are described in other posts on this site. [Coming soon])

The subtlety of the differences between boundaries and rules makes it easy to discount the impact each can have on the emotional climate in a classroom and the quality of the relationship between teachers and students. However, teachers who endeavored to shift from the win-lose familiarity of rules to the win-win prospects of boundaries report a significant decrease in conflicts and power struggles in their classes, and far greater success in reaching kids previously deemed difficult, unmotivated or, in some instances, even dangerous, than with any strategy previously attempted.

The original version of this article appeared in 21st Century Discipline, by Dr. Jane Bluestein This updated version of this information was adapted from The Win-Win Classroom © 2008, Corwin Publishing, Thousand Oaks, CA.